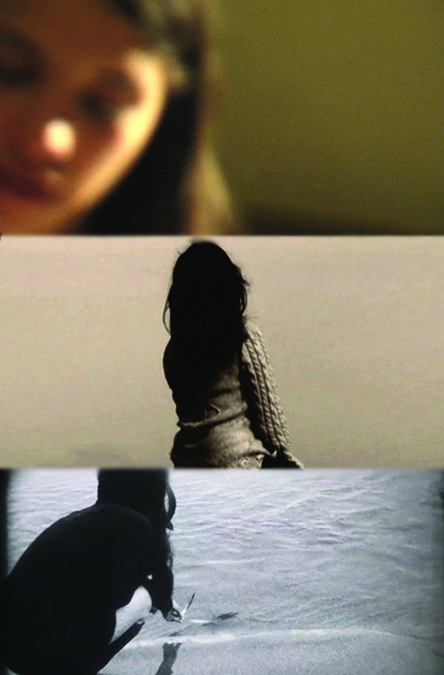 She who has no master is a triptych of experimental shorts by three women writer-filmmaker-artists negotiating the shifting terrain of historical and personal violence while confronting the three-fold of war, memory, and unwarranted masters. Julie Thi Underhill’s spoils negotiates the connections between militarism and family violence, with Persephone’s rotten pomegranate pluming smoke from Hades. Isabelle Thuy Pelaud’s letgo incorporates poetry and family photographs into a meditation upon her French father and Vietnamese mother. letgo investigates how Pelaud’s seemingly contradictory parts create a place for those who dwell “in between.” In Dao Strom’s self-mythology, a woman drifts through landscapes after inheriting war and exodus. She contemplates her role as traveler while tracing the currents flowing from historical, political, and mythological sources. Together these women’s films portray how the daughters begotten by colonialism and war are interrogating the divided loyalties and internal contradictions of lives marked by violence.

Julie Thi Underhill is a filmmaker, photographer, poet, and essayist. As a Cham-French-American (grand)daughter of conflicts in French Indochina/Việt Nam, her artistic and academic work addresses colonialism and war. She is in Veterans of War, Veterans of Peace and other collections.

Isabelle Thuy Pelaud is Associate Professor in Asian American Studies at San Francisco State University. She authored This Is All I Choose To Tell: History and Hybridity in Vietnamese American Literature and co-edited Troubling Borders: An Anthology of Art and Literature by Southeast Asian Women in the Diaspora. Her creative and academic work has been widely published.

Dao Strom is the author of Grass Roof, Tin Roof and The Gentle Order of Girls and Boys, and recipient of NEA and Oregon Arts Commission grants. As a songwriter, she is currently working on a hybrid music/literary/visual project, We Were Meant To Be A Gentle People.

Together these women voice a compelling three-fold narrative.